Derek and I were married for a mere 48-hours before I was pregnant. We were married September 27, 2014 and by November, I was horribly sick all day long. Functioning was almost impossible. I survived the 1st and 2nd trimesters, only by unisom, vitamin B-12, and some ginger ale.

By the end of my pregnancy, I was extremely tired with frequent migraines and blurry vision. I felt more nauseous and my body often hurt waking up, as much as it did going to bed. Thursday, May 28th 2015, I just finished an 8-hour shift at work and headed over to my weekly NST (non-stress test). I was hooked up to the monitor for quite some time during the appointment- which I was alone for, just assuming it was a routine appointment. The NST showed that I was having minor contractions (I assumed Braxton-Hicks) and my urine came back with a minor trace of leukocytes. My doctor thought it would be best to monitor my migraine in the hospital overnight, so I called Derek and had him bring over my hospital bag. I was fully anticipating going home the next morning, since I was only 35 weeks along.

The next morning, I was anxiously awaiting my doctor to come down to the ICU to give me my discharge instructions. I had been given a few bags of fluids and some iv ibuprofen overnight, but wasn’t finding much relief from my migraine. I had never really had migraines before, so I didn’t realize that I was having one at the time….I thought that it was a really bad headache and my body was hurting from being tired and pregnant. Once Dr. Jones finally came upstairs to the ICU, she checked my reflexes and saw no movement. She decided that I was declining rapidly and saw it best to deliver Roslynn at 35 weeks.

I called my family and Derek called his family. Everyone began congregating at the hospital. My dad and Amanda arrived first, then Rebecca and Sarah. Once I was prepped and Derek was dressed in his scrubs, they took me down to the delivery room. I remember being terrified. I was afraid that I was going to have serious complications, but I never thought anything would be wrong with our baby girl. I was also afraid because my mom hadn’t made it to the hospital yet, and my mom is one of the only people that can calm me down. My dad and Amanda were the last two people I saw before going into the OR.

I made it into the delivery room around 4:25 pm. My mother arrived at the hospital shortly after 4:30 pm. Derek was sitting outside of the OR, waiting for the anesthesiologist to give him the go-ahead to enter the room. Once Derek was in the room, I joked a bit with him to take pictures of my guts, and to film everything behind the curtain, but he refused. *Wussy* 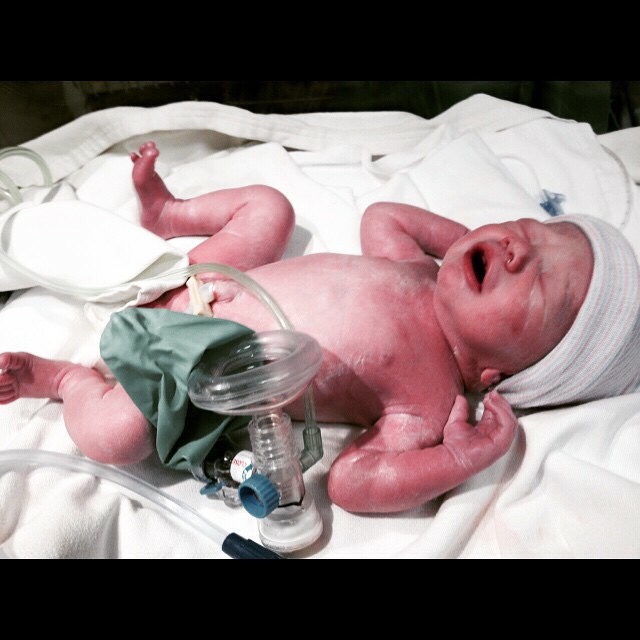 I don’t remember much more of that day. Immediately after Roslynn was cleaned off, she was rushed to the NICU for treatment. She had fluid in her lungs and was having a difficult time breathing. During the procedure, I had a spike in my blood pressure and lost a lot of blood, so I was given oxygen, fluids and magnesium (used to reduce the swelling in my brain). I had swelling that was caused from eclampsia- a rare form of high blood pressure in pregnancy. Typical preeclampsia is often diagnosed by observing protein in the urine, swelling, headaches, high blood pressure, vision issues and elevated liver enzymes. It it commonly seen in first pregnancies and often slowly creeps up to women in the late 2nd/early 3rd trimester. I must have been special because I skipped the PRE and went right to being eclamptic.

For the rest of the evening, I couldn’t move. I could hear people talking around and to me, but I could not move, open my eyes, or respond. Apparently when you are given magnesium, it can make you feel like you’ve been “hit by a bus”, giving an instant detox of swelling by sweating perfusely and running a fever. As awful as it was, it worked- I woke up the next day feeling much better, and barely remembering that I had a baby.

I still had not seen Roslynn by 1 PM the next day- I was trapped in ICU, which was not an easy walk to the NICU. I was FINALLY able to see her by dinner time the next day.

I’m going to save you all from the remainder of the NICU nightmare. It truly was one of the darkest moments of my life and made me value every moment I have with my children.

Once Roslynn finally came home, she began to progress well. She was a little behind on some of her motor skills and milestones, but we assumed it was because she was born premature and was a little behind babies her age. Once her first birthday came in May 2016, Roslynn was barely talking. She had a few words: “mama, dada, Nana and bob (her word for cat).” I decided to mention her deficits to our pediatrician when we saw her for Roslynn’s 1 year well-child check. Dr. Miller recommended we call early intervention to have them come out and give their options about her delays. The EI staff agreed that Roslynn could use speech therapy and occupational therapy, which she continued until her 3rd birthday this past May.

Roslynn has grown into such a fun, loving, sweet, polite and beautiful child. She is exceptionally bright and has her father’s love of knowledge, music and silly personality. Upon discharge from her services with EI and Schreiber Pediatrics, Roslynn had mastered all of her Occupational Therapy goals and is now speaking at a 4 year-old level.

Though some may say that we were hyperaware in Roslynn’s development, we did not want her to fall more behind than she already was, so we sought out services to help give her the push to be where she should be. As a parent, you know your child better than anyone else. I knew that we needed a little extra help for Roslynn to grow and progress, so we went with getting her services to jump-start her development. If you have the slightest suspicion that something isn’t 100% right with your child, call your pediatrician for help. You won’t regret it.

It’s hard to believe that there was a time that I prayed she would talk and converse with me, but now I pray for quiet! She never stops chatting and is full of so much love and life. She has become Greyson’s little side-kick, often speaking for him and telling others about his delays, often saying:

For a three year-old girl, she really is one of the smartest and sweetest children I know. She will give her whole heart to anyone and she loves her little baby G.

One thought on “Roslynn Joann”