We had a regular baby monitor for Greyson up until he was 9 months old. His cries were so high pitched that we didn’t see a use for the monitor, since he was waking us up numerous times a night anyway.

When Dr. Comi recommended putting G in a toddler bed (he’s been climbing out of the crib on the lowest setting) for his own safety, we knew we would have to get a night-vision camera to make sure he stays safe at night. Because of Greyson’s Pica diagnosis, he tends to eat/mouth inedible objects and even swallows items if not watched closely. We wanted a WiFi camera so that both Derek and I could watch him from our phones, no matter our location. We found the one we bought on Amazon for $29.99, after consulting with my sister’s “techy” boyfriend, Will (Thanks Will). Inexpensive and a noninvasive way to monitor him while he’s alone in a room filled with toys.

I am convinced that technology has been a blessing AND a curse for families with kids on the spectrum. I have not lowered my standards enough yet to buy G a tablet, but once that day comes, I don’t know if I will love it or hate it. I see many scenerios that tablets could be a positive reinforcement tool, but I also don’t want it to become a crutch for us. I do highly recommend technology for kids when you have to distract them, or for educational purposes.

Another wonderful lifesaver that we started this week, is melatonin. This is night #3 using a tiny dose of melatonin to help G get to sleep. He has been having issues falling and staying asleep recently and typically relies on banging his head until he’s zonked for the night. Luckily this behavior has decreased in the past week, with the aid of melatonin.

New behaviors this week from G, include eating/playing in his feces and stripping down to his birthday suit, to run around and feel the breeze without a diaper. I must admit, I love some of his quirks and find humor in some of his behaviors, but this, not so much. As much as I don’t want to put him in overalls or suspenders, he has mastered the skill of taking off his clothing. I will tolerate the farmer look until this passes, I suppose. I also do not want to restrict his upper body movement during diaper changes, but I can’t have him playing or eating his poop. The “let’s give him something to hold while we change him” tactic is not really working anymore. 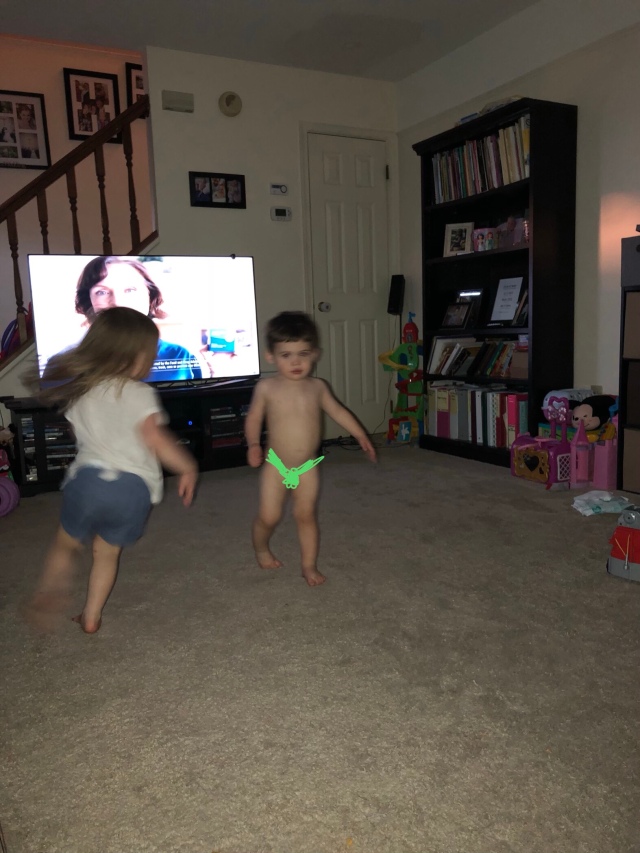 Nudist in the making. I drew on a diaper to keep it PG.

I have decided to take some time off next week, so that I can stay home and monitor Greyson’s behavior and medical needs, while Derek’s Mom and Stepdad Rick are in Switzerland for two weeks. When I am working, Suzanne (my other lifesaver) is going to be with the kids, entertaining them. I’m looking forward to spending some time with the kids and having my mini staycation with my babies. Side note, we will also be extremely busy next week as well. We have another trip to Baltimore on Friday and another psychiatric evaluation to begin services at CHI children’s behavioral health services in Lancaster. I also discontinued G’s Physical therapy sessions in our home, temporarily until we can figure out what his medical needs are at this time. We also received word that he was approved for a therapy support dog through an agency in Maryland, which we are hoping to be paired with a dog by Christmas. Fingers crossed.