May brought us a Physical Therapy evaluation at Schreiber Pediatric Rehab Center in Lancaster, the start of our in-home ABA Services and a consultation for bilateral tubes in Greyson’s ears.

The evaluation for PT did not go well. Greyson refused to cooperate with any of the tasks that the evaluator presented him with. After about 15 minutes of him screaming and flopping around on the floor, she determined that he needed PT services but would not recommend them at Schreiber. PT at Schreiber is in a large multi-purpose room that 3-4 different therapists may use at a time, and I agreed that it would be best not to have G in that setting. I didn’t want him to upset the other children receiving PT services there. The evaluator did recommend in-home PT services, as well as getting Greyson fitted for sure-steps. 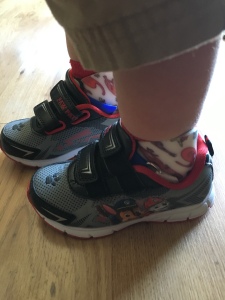 Sure-steps are recommended for children that have hyper-mobility of the joints and difficulties balancing. I was familiar with these orthotics because of a former client I had that also was required to wear them. Derek took G to be fitted for the sure-steps and even picked out the dinosaur pattern. Good job, Daddy!

Later in May, the sure-steps came in and G had another fitting to make sure everything fit okay. Since he began wearing the inserts, he has gotten more used to them, though he still hates wearing them…..especially in the summer heat. We have noticed a slight improvement in his balance and isn’t as floppy when he wears them. 😃

Greyson began his in-home ABA (Applied Behavior Analysis) Services mid-month. He was paired with a fantastic RBT (registered behavior technician) and BCBA (board certified behavior analyst). Working in collaboration with the ABA team, Derek’s mother and step-father, Derek and I began to see changes in Greyson’s behavior.

Unfortunately, these were more problematic behaviors than he was previously having (this is to be expected because he was having people force him to work on functional play skills).Tantrums were frequent, almost as soon as a demand was placed on Greyson, or we removed his access to something he wanted (which was always something dangerous- like a wire, coin, etc.). As a TSS (therapeutic support staff), Derek was used to ignoring these tantrums and making sure neither of us were reinforcing the behavior. I haven’t worked as a TSS in a few years, so I am not as patient as he may be. I find Greyson’s cries to be quite overwhelming. Unfortunately, most of his time at home is spent crying, and I find it difficult to concentrate or accomplish much when he is around.

I used to feel horrible having to ask for help, but as the tantrums increased and my patience was increasingly dissolving, I had to bring in some back-up. Fortunately, I have a wonderful friend from college, Suzanne, who stepped in and began cleaning up my life. Literally…..she cleans my entire house once a week. She has taken so much off of Derek and I, and I’m not sure where we would be right now if we spent all of our free-time cleaning the house and managing G’s appointments/therapies. She has truly been such a gift to us.

If I have learned anything throughout the past year, I have learned that it’s okay to ask for help. We all need it at some point in our lives, and this is the time that I need it the most.

It’s also okay to say no. No was not a word I used often before last fall. I was always doing what I could to help others, often putting my own needs on hold. Not anymore. I finally realized that I can’t be the mother, wife, daughter, friend or employee that I want to be if I don’t take care of myself first. Even mothers of children that don’t have a disability, you can’t give your best if you don’t feel your best.

Finally, the third thing I have learned this year has been to celebrate the small stuff. I used to obsess over the thought that G’s problems were all my fault: I didn’t eat organic food while pregnant with him, I took too many medications, I was too stressed all the time. Every reason I could think of, I tried to create a connection between his diagnosis and something I did. Genetically speaking, it is nobody’s fault that we have a son with a neurological condition because what G has is not genetic. Regardless of blame, it doesn’t change the fact that he is my son, and I love him for the way that he is.

I often find myself in deep conversation with my supervisor, Ronda. She has been a huge supporter of my journey with Greyson, and often brings me back to reality when I start to feel myself slipping into emotional oblivion. She asked me one day, “If you knew what you know now when you were pregnant with Greyson, would it have made a difference to you? Would you have thought about things differently?”. This has really been a difficult process and I often feel like the worst parent in the world, but I know at the end of the day, I would not change a single thing about my journey thus far with Greyson.

Even if the genetic testing we had done when G was in utero, came back positive for a genetic disorder, Derek and I would have continued on as we did. So, I knew that no matter what I told myself, this was not anyone’s fault and that Greyson was sent to Derek and I for a reason. Whether you believe in God or a higher power, everything happens for a reason and I am a firm believer that we were given this opportunity to learn and to educate others about our journey.

FINALLY the end of May came, after what felt like the longest month all year. We had the go-ahead for G to get tubes in his ears and we celebrated Roslynn’s 3rd birthday. I think we were all looking forward to Summer starting.

One thought on “May showers bring……May tantrums?”